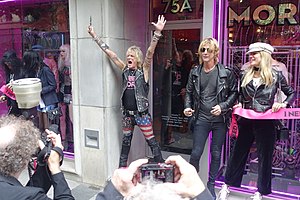 Webb worked at Trash and Vaudeville from 1999 until the store moved off of St.Marks Place in 2016.As a stylist, Webb helped to dress artists and musicians such as the Ramones, Beyoncé, Lady Gaga, Joan Jett, Sebastian Bach and many others.

On October 13, 2017, Webb opened his own rock boutique in New York City called "I Need More", named after a song by Iggy Pop, at 75A Orchard Street.

The grand opening was attended by Slash and Duff from Guns N' Roses.