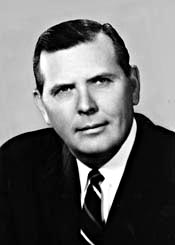 He represented Virginia's 10th congressional district, consisting of suburbs of Arlington, Falls Church and sections of Fairfax County and Alexandria, and became known for his advocacy for federal workers (and constituent services) as well as his opposition to integration in the 1950s and 1960s.

Virginia politician
Back
This content was extracted from Wikipedia and is licensed under the Creative Commons Attribution-ShareAlike 3.0 Unported License