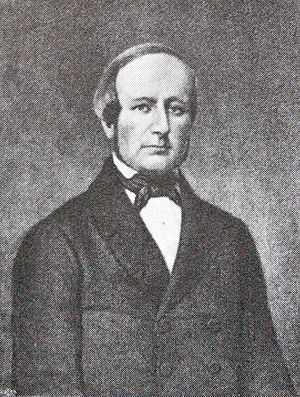 Johan August Wahlberg (9 October 1810 , Sweden – 6 March 1856 Lake Ngami, Bechuanaland) was a Swedish naturalist and explorer.Wahlberg started studying chemistry at the University of Uppsala in 1829, and later forestry, agronomy and natural science, graduating from the in 1834.

In 1832 he joined Professor Carl Henrik Boheman, a famous entomologist, on a collecting trip to Norway.In 1833 and 1834 he travelled in Sweden and Germany on forestry research projects.

He joined the Office of Land Survey and was appointed an engineer in 1836, becoming an instructor at the .He travelled in southern Africa between 1838 and 1856, sending thousands of natural history specimens back to Sweden.

He was exploring the Okavango area when he was killed, along the Thamalakane river about 10 km northwest of Maun in today's Botswana, by a wounded elephant.

Before his death was known in Sweden, on October 8, 1856 he was elected a member of the Royal Swedish Academy of Sciences, since the news of his death had not reached Stockholm at this time.

He is thus the only member of this academy who has been elected after his death.