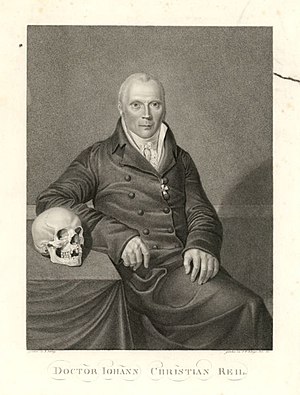 He coined the term psychiatry – Psychiatrie in German – in 1808.Medical conditions and anatomical features named after him include Reil's finger (later called digitus mortuus or Raynaud syndrome) and the Islands of Reil in the cerebral cortex.

In 1809, he was the first to describe the white fibre tract now called the arcuate fasciculus.He is frequently and erroneously crediting with discovering the locus coeruleus, which was first described by Félix Vicq-d'Azyr.

In 1779 and 1780, Reil became acquainted with the scientist Johann Friedrich Blumenbach while Reil was studying medicine in Göttingen.From 1788 to 1810, Reil worked in a hospital in Halle, Germany.

There he developed a medical program based heavily on Friedrich Schelling's Naturphilosophie In 1795 Reil established the very first journal of physiology in German, the Archiv für die Physiologie.

In 1810 he became one of the first university teachers of psychiatry when appointed professor of medicine in Berlin.From 1802-1805, the poet Goethe visited Reil to discuss scientific matters such as psychiatry and to access his skills as a physician.

He argued there should not just be a branch of medicine (psychische Medizin) or of theology or penal practice, but a discipline in its own right with trained practitioners.

He also sought to publicize the plight of the insane in the asylums and to develop a 'psychical' method of treatment, consistent with the moral treatment movement of the times.

He was critical of Frenchman Philippe Pinel, however.Reil was mainly theoretical, with little direct clinical experience, by contrast with Pinel.

Reil is considered a writer within the German Romantic context, and his 1803 work Rhapsodien uber die Anwendung der psychischen Kurmethode auf Geisteszerrüttungen ('Rhapsodies about applying the psychological method of treatment to mental breakdowns') has been called the most important document of Romantic psychiatry.

Reil didn't conceptualize madness as just a break from reason but as a reflection of wider social conditions, and believed that advances in civilization created more madness.

He saw this as due not to physical lesions in the brain or to hereditary evil, but as a disturbance in the harmony of the mind's functions (forms of awareness or presence), rooted in the nervous system.

Reil also wrote on Blumenbach's idea of the Bildungstrieb (literally, "building power"), a vital force within each organism that compels it to create, maintain, and repair its form.

In Reil's essay "Von der Lebenskraft," he argued that each organism contained a "dormant germ" that was activated by the addition of the father's "animal force." Reil died on 22 November 1813 from typhus contracted while treating the wounded in the Battle of Leipzig, later known as the Battle of the Nations, one of the most severe confrontations of the Napoleonic Wars.


German physician
Back
This content was extracted from Wikipedia and is licensed under the Creative Commons Attribution-ShareAlike 3.0 Unported License