He earned his doctorate in 1777 from the University of Jena, where in 1779 he became an associate professor.At Jena he was director of a health institute and subdirector of maternity hospital services.

Known as an outstanding clinical teacher, one of his better-known students was Adam Elias von Siebold (1775–1828).He was a physician to the Weimar Ducal Court, in particular Anna Amalia and Carl August of Saxe-Weimar-Eisenach.

He also published works in the fields of pharmacology and pediatrics, and was the author of a treatise on the history of tetanus.

In addition, he is credited with making modifications to a number of obstetrical instruments and devices. 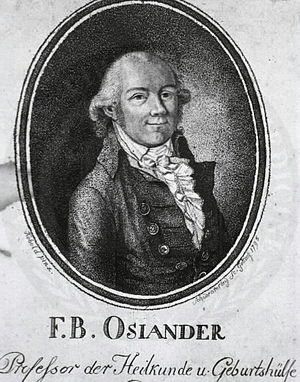 German obstetrician
Back
This content was extracted from Wikipedia and is licensed under the Creative Commons Attribution-ShareAlike 3.0 Unported License