Johann Faulhaber (5 May 1580 – 10 September 1635) was a German mathematician.Born in Ulm, Faulhaber was a trained weaver who later took the role of a surveyor of the city of Ulm.

He collaborated with Johannes Kepler and Ludolph van Ceulen.Besides his work on the fortifications of cities (notably Basel and Frankfurt), Faulhaber built water wheels in his home town and geometrical instruments for the military.

Faulhaber made the first publication of Henry Briggs's Logarithm in Germany.He is also credited with the first printed solution of equal temperament.

He died in Ulm.Faulhaber's major contribution was in calculating the sums of powers of integers.Jacob Bernoulli makes references to Faulhaber in his Ars Conjectandi. 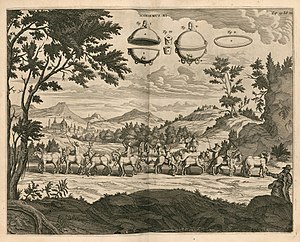 
German mathematician
Back
This content was extracted from Wikipedia and is licensed under the Creative Commons Attribution-ShareAlike 3.0 Unported License