Johann Gottfried Steffan (December 13, 1815 in Wädenswil/Switzerland – June 16, 1905 in Munich/Germany) was one of the most important Swiss landscapists of the 19th century.

After his apprenticeship as lithographer in his home town, Steffan travelled to Munich in 1833 in order to receive further education.

He there attended the Academy of Fine Arts under Peter von Cornelius.Under the influence of Carl Rottmann, he turned to realistic Landscape art.

Steffan's studio became the center of the Swiss artists in Munich.Together with numerous colleagues – among these Rudolf Koller –, he made several study trips to the Swiss Alps, especially to the Canton of Glarus and to Lake Walen.

Later, he quite frequently went to Berchtesgaden and to Ramsau where he found many of his motifs.Steffan's paintings mostly are idealistic landscapes of the Munich School and often show mountain motifs. 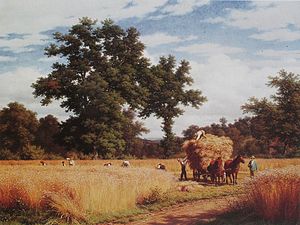 Swiss painter
Back
This content was extracted from Wikipedia and is licensed under the Creative Commons Attribution-ShareAlike 3.0 Unported License