Johann Jakob Zeiller (8 July 1708 – 8 July 1783) was an Austrian painter.Zeiller was born in Reutte, trained by his father Paul who was also a painter.

In 1723 he began his apprenticeship with Sebastiano Conca in Rome, and then from 1729 to 1732 with Francesco Solimena in Naples.From there, Zeiller moved directly to Vienna, where he operated from 1733 until 1743 as an employee of Paul Troger.

In 1737 he received the coveted title of an imperial court painter from the Academy of Fine Arts Vienna.Zeiller painted primarily religious-themed frescoes.

He did frescoes for the Aldersbach Abbey in Fürstenzell and the Ettal Abbey.He later returned to Reutte where he continued to work until his death in 1783.

He contributed many frescoes in churches in Tyrol. 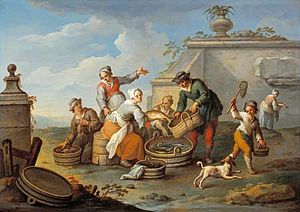 Austrian painter
Back
This content was extracted from Wikipedia and is licensed under the Creative Commons Attribution-ShareAlike 3.0 Unported License