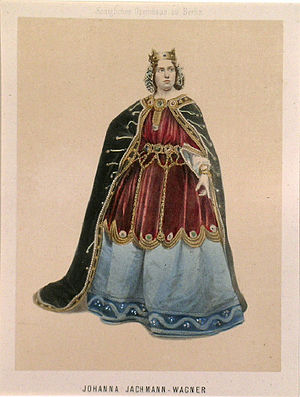 Johanna Jachmann-Wagner or Johanna Wagner (13 October 1828 – 16 October 1894) was a mezzo-soprano singer, tragédienne in theatrical drama, and teacher of singing and theatrical performance who won great distinction in Europe during the third quarter of the 19th century.

She was a niece of the composer Richard Wagner and was the original performer, and in some respects the inspiration, of the character of Elisabeth in Tannhäuser.

She was also the original intended performer of Brünnhilde in Der Ring des Nibelungen, but in the event assumed other roles.

German mezzo-soprano
Back
This content was extracted from Wikipedia and is licensed under the Creative Commons Attribution-ShareAlike 3.0 Unported License