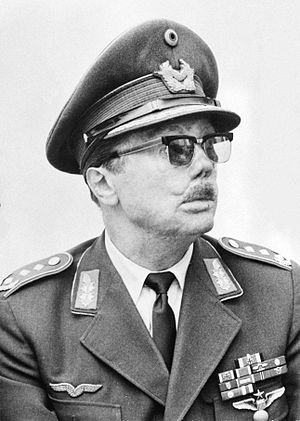 He was one of very few Luftwaffe pilots who survived to fly operationally through the whole of the war period 1939–45.

Steinhoff was also one of the highest-scoring pilots with 176 victories, and one of the first to fly the Messerschmitt Me 262 jet fighter in combat as a member of the Jagdverband 44 squadron led by Adolf Galland.

Steinhoff was decorated with the Knight's Cross of the Iron Cross with Oak Leaves and Swords, and later received the Grand Cross of the Order of Merit of the Federal Republic of Germany and several foreign awards including the American Legion of Merit and the French Legion of Honour.

He played a role in the so-called Fighter Pilots' Revolt late in the war, when several senior air force officers confronted Hermann Göring.

Steinhoff joined the West German government's Rearmament Office as a consultant on military aviation in 1952 and became one of the principal officials tasked with rebuilding the German Air Force through the Cold War.

In retirement, Steinhoff became a widely read author of books on German military aviation during the Second World War and the experiences of the German people at that time.

German World War II fighter pilot
Back
This content was extracted from Wikipedia and is licensed under the Creative Commons Attribution-ShareAlike 3.0 Unported License