Johannes Streich (16 April 1891 – 20 August 1977) was a German general in the Wehrmacht during World War II who commanded the 5th Light Division during the early stages of the North African Campaign.

Sacked for his poor performance during the Siege of Tobruk, he later briefly commanded the 16th Motorised Infantry Division during the advance on Moscow.

A veteran of World War I, he was also a recipient of the Knight's Cross of the Iron Cross. 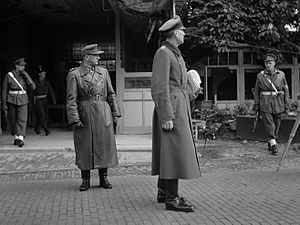 German General and Knight's Cross recipients
Back
This content was extracted from Wikipedia and is licensed under the Creative Commons Attribution-ShareAlike 3.0 Unported License