Shortly afterwards, he relocated to Vienna, and in 1862 became a member of the Vienna Academy of Sciences.From 1874 onward, he taught classes as a professor of classical philology at the University of Berlin.

He was a member of the Prussian Academy of Sciences.Vahlen was a specialist of Greek and Latin literature, publishing works on a wide array of ancient authors that included Aristotle, Ennius, Horace, Plautus and Gnaeus Naevius.

He is particularly known for his interpretive work involving the Poetics of Aristotle and the fragmentary relics of the poet Ennius;

Ennianae poesis reliquiae.In 1913 Vahlen's library of over 10,000 volumes of ancient and classical works were acquired by the University of Illinois. 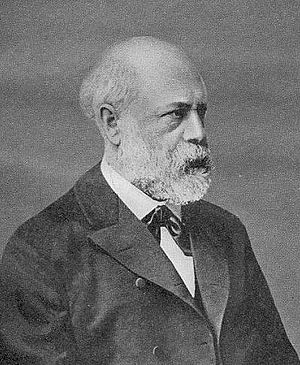 German philologist
Back
This content was extracted from Wikipedia and is licensed under the Creative Commons Attribution-ShareAlike 3.0 Unported License