He graduated from Harvard College in 1879.He studied law at Columbia Law School in New York City.He was admitted to the bar in 1889 and was a clerk of the central district court of Worcester from 1892 to 1897.

He was elected as a Democrat to the Sixty-second Congress from March 4, 1911 to March 3, 1913.He failed reelection in 1912 to the Sixty-third Congress.

He was a delegate to the Democratic National Convention in 1912.In 1915, he was appointed postmaster of Worcester, and served until his death. 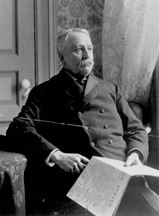