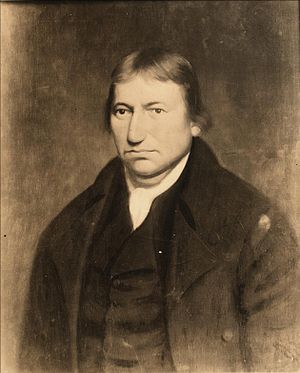 His son, Stevenson Archer and grandson Stevenson Archer II were also Congressmen from Maryland.Archer was born near Churchville in the Province of Maryland, and attended the West Nottingham Academy in Cecil County, later graduating from Princeton College in 1760.

He studied theology, but owing to a throat affliction, he abandoned his studies in that area and began the study of medicine.

He graduated as a physician from the College of Philadelphia in 1768, receiving the first medical diploma issued on the American continent.

In 1769, Archer commenced the practice of law in Harford County.He was a member of the Revolutionary committee from 1774 to 1776, and later raised a military company during the American Revolutionary War.

He was a member of the first state constitutional convention of 1776, and served in the Maryland House of Delegates from 1777 to 1779.

During the Revolutionary War, Archer was volunteer aide-de-camp to General Anthony Wayne at Stony Point.On June 1, 1779, Archer was made a captain and subsequently a major in the Continental Army.

Archer was elected as a Democratic-Republican to the Seventh, Eighth, and Ninth Congresses, serving from March 4, 1801 until March 3, 1807.He founded, with his son , the medical and chirurgical faculty of Maryland in 1799.

In 1810, Archer documented a case of superfecundation, more specifically called "heteropaternal superfecundation," in which a Caucasian woman gave birth to mixed twins — one Caucasian, one Afro-Caucasian - after having had intercourse with two men of differing race within a few weeks.

Archer died at his country home, Medical Hall, near Churchville, Maryland, and is interred in the Presbyterian Cemetery of Churchville.

Historical Note: A descendant of Dr.John Archer, one and his wife Mary Elizabeth Walker Archer, bought the 65 acre farm "Shamrock" from Ellen Howe Davis in 1850.

The farm was retained in the Archer family until 1955 when it was sold to the Sparr Construction Company to become the current development of Shamrock in Bel Air, MD.

The mansion on the property was burned to the ground by a contingent of 70 Harford County Firemen in October 1963 to make way for the development.

Back
This content was extracted from Wikipedia and is licensed under the Creative Commons Attribution-ShareAlike 3.0 Unported License