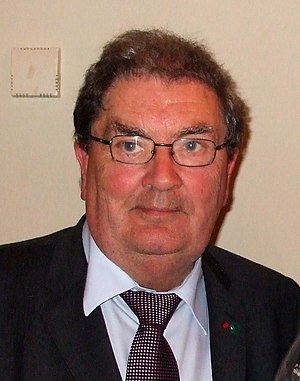 A native of Derry, he was a founding member of the Social Democratic and Labour Party (SDLP), and served as its second leader from 1979 to 2001.

Hume was co-recipient of the 1998 Nobel Peace Prize with David Trimble, and also received both the Gandhi Peace Prize and the Martin Luther King Award.

He is the only person to receive the three major peace awards.In 2012, Pope Benedict XVI made Hume a Knight Commander of the Papal Order of St.

Gregory the Great.He was named "Ireland's Greatest" in a 2010 public poll by Irish national broadcaster RTÉ to find the greatest person in Ireland's history.

Irish politician
Back
This content was extracted from Wikipedia and is licensed under the Creative Commons Attribution-ShareAlike 3.0 Unported License