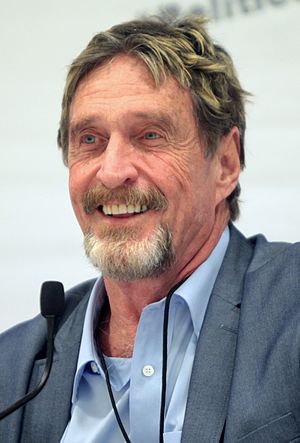 John David McAfee ( MAK-ə-fee; 18 September 1945 – 23 June 2021) was a British-American computer programmer, businessman, and two-time presidential candidate who unsuccessfully sought the Libertarian Party nomination for president of the United States in 2016 and 2020.

In 1987, he wrote the first commercial anti-virus software, founding McAfee Associates to sell his creation.He resigned in 1994 and sold his remaining stake in the company.

McAfee became the company's most vocal critic in later years, urging consumers to uninstall the company's anti-virus software, which he characterized as bloatware.

He disavowed the company's continued use of his name in branding, a practice that has persisted in spite of a short-lived corporate rebrand attempt under Intel ownership.

McAfee's fortunes plummeted in the financial crisis of 2007–2008.After leaving McAfee Associates, he founded the companies Tribal Voice (makers of the PowWow chat program), QuorumEx, and Future Tense Central, among others, and was involved in leadership positions in the companies Everykey, MGT Capital Investments, and Luxcore, among others.

His personal and business interests included smartphone apps, cryptocurrency, yoga, light-sport aircraft and recreational drug use.He resided for a number of years in Belize, but returned to the United States in 2013 while wanted in Belize for questioning on suspicion of murder.

In October 2020, McAfee was arrested in Spain over U.S. tax evasion charges.U.S. federal prosecutors brought criminal and civil charges alleging that McAfee had failed to pay income taxes over a four-year period.

On 23 June 2021, he was found dead due to an apparent suicide by hanging in his prison cell near Barcelona shortly after his extradition to the U.S. was authorized by the Spanish National Court.

His death generated speculation and conspiracy theories about the possibility that he was murdered.McAfee's wife, Janice McAfee, said she did not believe McAfee committed suicide, and that the suicide note was a forgery.