John William Finn (24 July 1909 – 27 May 2010) was a sailor in the United States Navy who, as a chief petty officer, received the United States military's highest decoration, the Medal of Honor, for his actions during the attack on Pearl Harbor in World War II.

As a chief aviation ordnanceman stationed at Naval Air Station Kaneohe Bay, he earned the medal by manning a machine gun from an exposed position throughout the attack, despite being repeatedly wounded.

He continued to serve in the Navy and in 1942 was commissioned an ensign.In 1947 he was reverted to chief petty officer, eventually rising to lieutenant before his 1956 retirement.

In his later years he made many appearances at events celebrating veterans.At the time of his death, Finn was the oldest living Medal of Honor recipient, the last living recipient from the attack on Pearl Harbor, and the last United States Navy recipient of World War II. 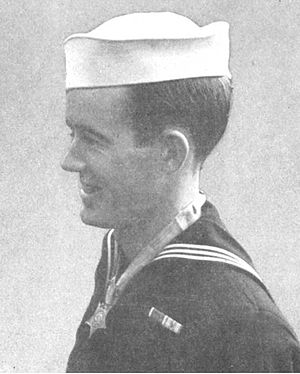