John Robert Wooden (October 14, 1910 – June 4, 2010) was an American basketball coach and player.Nicknamed the "Wizard of Westwood", he won ten National Collegiate Athletic Association (NCAA) national championships in a 12-year period as head coach for the UCLA Bruins, including a record seven in a row.

No other team has won more than four in a row in Division I college men's or women's basketball.Within this period, his teams won an NCAA men's basketball record 88 consecutive games.

As a 5'10" guard, Wooden was the first player to be named basketball All-American three times, and the 1932 Purdue team on which he played as a senior was retroactively recognized as the pre-NCAA Tournament national champion by the Helms Athletic Foundation and the Premo-Porretta Power Poll.

Wooden was inducted into the Naismith Memorial Basketball Hall of Fame as a player (1960) and as a coach (1973), the first person ever enshrined in both categories.

One of the most revered coaches in the history of sports, Wooden was beloved by his former players, among them Lew Alcindor (later Kareem Abdul-Jabbar) and Bill Walton.

Wooden was renowned for his short, simple inspirational messages to his players, including his "Pyramid of Success." These often were directed at how to be a success in life as well as in basketball.

Wooden's 29-year coaching career and overwhelmingly positive critical acclaim have created a legacy of great interest in not only sports, but in business, personal success, and organizational leadership as well. 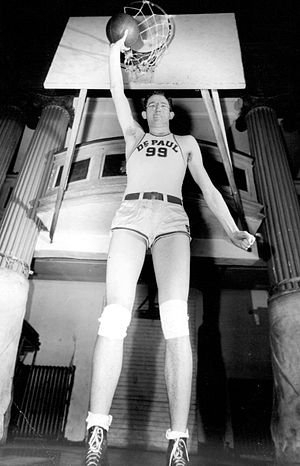 Basketball player
Back
This content was extracted from Wikipedia and is licensed under the Creative Commons Attribution-ShareAlike 3.0 Unported License