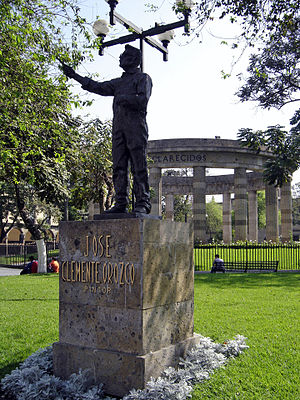 José Clemente Orozco (November 23, 1883 – September 7, 1949) was a Mexican caricaturist and painter, who specialized in political murals that established the Mexican Mural Renaissance together with murals by Diego Rivera, David Alfaro Siqueiros, and others.

Orozco was the most complex of the Mexican muralists, fond of the theme of human suffering, but less realistic and more fascinated by machines than Rivera.

His drawings and paintings are exhibited by the Carrillo Gil Museum in Mexico City, and the Orozco Workshop-Museum in Guadalajara.

Orozco was known for being a politically committed artist, and he promoted the political causes of peasants and workers.