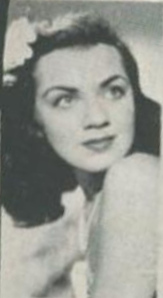 Kallen performed with popular big band leaders of the 1940s, including Jimmy Dorsey and Harry James, before establishing a solo career.

She is widely known for her 1954 solo recording '"Little Things Mean a Lot", a song that stayed at the U.S.

Billboard number one spot for nine consecutive weeks and took top honor as 1954's #1 song of the year, charted in the U.S. for almost seven months, hit No. 1 on the UK singles chart, and sold more than two million copies.

Voted "most popular female singer" in 1954 in both Billboard and Variety polls, Kallen lost her voice at the London Palladium in 1955 at the top of her career and stopped singing before an audience for four years.

After testing her voice under a pseudonym in small town venues, she ultimately returned and went on to achieve 13 top-ten career hits.

American popular singer
Back
This content was extracted from Wikipedia and is licensed under the Creative Commons Attribution-ShareAlike 3.0 Unported License