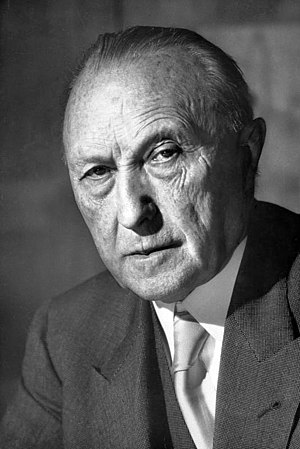 From 1946 to 1966, he was the first leader of the Christian Democratic Union (CDU), a Christian democratic party he co-founded, which under his leadership became the dominant force in the country.

A devout Roman Catholic and member of the Catholic Centre Party, Adenauer was a leading politician in the Weimar Republic, serving as Mayor of Cologne (1917–1933) and as president of the Prussian State Council (1922–1933).

In the early years of the Federal Republic, he switched focus from denazification to recovery, and led his country from the ruins of World War II to becoming a productive and prosperous nation that forged close relations with France, the United Kingdom and the United States.

Adenauer belied his age by his intense work habits and his uncanny political instinct.He displayed a strong dedication to a broad vision of market-based liberal democracy and anti-communism.

A shrewd and strategic politician, Adenauer was deeply committed to a Western-oriented foreign policy and restoring the position of West Germany on the world stage.

He worked to restore the West German economy from the destruction of World War II to a central position in Europe, presiding over the German economic miracle together with his Minister of Economics, Ludwig Erhard, and a driving force in re-establishing national military forces (the Bundeswehr) and intelligence services (the Bundesnachrichtendienst) in West Germany in 1955 and 1956.

Adenauer opposed recognition of the rival German Democratic Republic or the Oder-Neisse line.He skillfully used these points in electoral campaigns against the SPD, which was more sympathetic to co-existence with the GDR and the post-war borders.

Adenauer made West Germany a member of NATO.Although also a proponent of European unity, Adenauer pursued strong Atlanticist links with the United States as a counterbalance to France.

Adenauer, who resigned as Chancellor at the age of 87 and remained head of the governing CDU until his retirement at 90, was often dubbed "Der Alte" ("the old one").

According to British historian Roy Jenkins, he was "the oldest statesman ever to function in elected office" and the oldest head of government of a major country in modern European history as of 1993.

In the 2010s, the former record has been surpassed by several leaders of other countries. 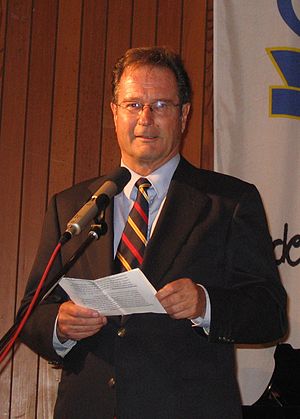