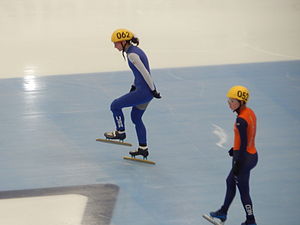 At the 2018 Winter Olympics, she was part of the Dutch 3000 metres relay team that won a bronze medal.She won gold at the World Championships one year later.

By doing so, she became the first Dutch woman to win a world short track title at an individual event.

Speed skater
Back
This content was extracted from Wikipedia and is licensed under the Creative Commons Attribution-ShareAlike 3.0 Unported License