Layne Thomas Staley (born Layne Rutherford Staley;August 22, 1967 – April 5, 2002) was an American musician best known as the original lead singer and co-songwriter of the rock band Alice in Chains, which rose to international fame in the early 1990s as part of Seattle's grunge movement.

Staley was known for his distinctive vocal style and tenor voice, as well as his harmonizing with guitarist/vocalist Jerry Cantrell.

Staley was also a member of the glam metal bands Sleze and Alice N' Chains, and the supergroups Mad Season and Class of '99. "Man in the Box", the second single from Alice in Chains' debut album, Facelift (1990), garnered Staley critical recognition for his vocal style.

However, Staley's deteriorating condition due to heroin abuse led him to enter a rehabilitation clinic.He began to work on a side project with several Seattle musicians, Mike McCready of Pearl Jam, Barrett Martin of Screaming Trees and John Baker Saunders of The Walkabouts, which came to be Mad Season, while Alice in Chains went into hiatus.

During Alice in Chains' hiatus, reports of Staley's drug addiction began to gain widespread circulation in fan and media communities, in part due to changes in his physical condition brought on by prolonged heroin abuse.

On April 10, 1996, the band returned with a performance on MTV Unplugged performance in New York; it was their first concert in two-and-a-half years.

From mid-1996 onwards, Staley was out of the public spotlight, never to perform live again.His struggle with depression and addiction for much of his adult life resulted in his death from a speedball overdose on April 5, 2002, at the age of 34. 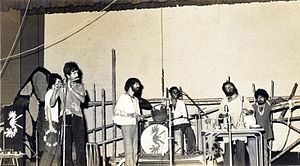 Musician
Back
This content was extracted from Wikipedia and is licensed under the Creative Commons Attribution-ShareAlike 3.0 Unported License