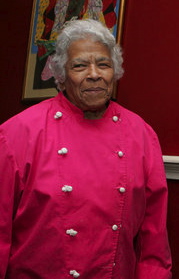 Leyah (Leah) Chase (née Lange;January 6, 1923 – June 1, 2019) was an American chef based in New Orleans, Louisiana.An author and television personality, she was known as the Queen of Creole Cuisine, advocating both African-American art and Creole cooking.

Her restaurant, Dooky Chase, was known as a gathering place during the 1960s among many who participated in the Civil Rights Movement, and was known as a gallery due to its extensive African-American art collection.

In 2018 it was named one of the 40 most important restaurants of the past 40 years by Food & Wine.Chase was the recipient of a multitude of awards and honors.

In her 2002 biography, Chase's awards and honors occupy over two pages.Chase was inducted into the James Beard Foundation's Who's Who of Food & Beverage in America in 2010.

She was awarded Times-Picayune Loving Cup Award in 1997.The Southern Food and Beverage Museum in New Orleans, Louisiana named a permanent gallery in Chase's honor in 2009.

American chef
Back
This content was extracted from Wikipedia and is licensed under the Creative Commons Attribution-ShareAlike 3.0 Unported License