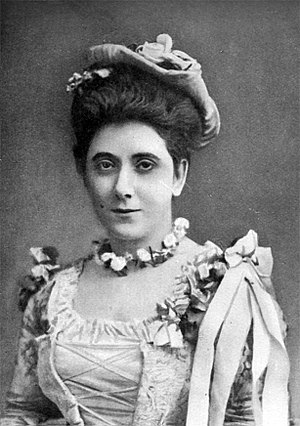 Leonora Braham (3 February 1853 – 23 November 1931), born Leonora Abraham, was an English opera singer and actress primarily known as the creator of principal soprano roles in the Gilbert and Sullivan comic operas.

Beginning in 1870, Braham starred for several years in the intimate musical German Reed Entertainments in London.In 1878, she moved to North America, where she continued to perform in comic opera.

After returning to England, she was engaged by the D'Oyly Carte Opera Company, creating five of the leading soprano roles in the hit series of Gilbert and Sullivan operas, including the title role in Patience (1881), Phyllis in Iolanthe (1882), the title role in Princess Ida (1884), Yum-Yum in The Mikado (1885), and Rose Maybud in Ruddigore (1887).

She also played Aline in the first revival of The Sorcerer (1884–85).After leaving the D'Oyly Carte company, Braham continued to perform in England and widely on tour, starring in comic opera and grand opera in Australia, South America and South Africa.

By the mid-1890s, she returned to Britain, playing in musical comedy and light opera, briefly rejoining the D'Oyly Carte Opera Company.

She then continued to perform until 1912 in Britain and America, including with Lillie Langtry in plays without music.


Singer and actress
Back
This content was extracted from Wikipedia and is licensed under the Creative Commons Attribution-ShareAlike 3.0 Unported License