He was an army general who seized the presidency from Iskander Mirza in a coup in 1958, the first successful coup d'état in the country.

Popular demonstrations and labour strikes supported by the protests in East Pakistan ultimately led to his forced resignation in 1969.Trained at the British Royal Military College, Ayub Khan fought in World War II as a colonel in the British Indian Army before deciding to transfer to the Pakistan Army in the aftermath of the partition of British India in 1947.

His assignments included command of the 14th Division in East-Bengal.He was elevated to become the first native Commander-in-Chief of the Pakistan Army in 1951 by Prime Minister Liaquat Ali Khan.

After appointing General Musa Khan as the army commander-in-chief in 1958, the policy inclination towards the alliance with the United States was pursued that saw the allowance of American access to facilities inside Pakistan, most notably the airbase outside of Peshawar, from which spy missions over the Soviet Union were launched.

Relations with neighboring China were strengthened but deteriorated with Soviet Union in 1962, and with India in 1965.However, when the Soviet Union facilitated the meetings between Pakistan and India that led to the Tashkent Declaration in 1966, relations among the three nations improved.

At the home front, the policy of privatisation and industrialization was introduced that made the country's economy Asia's fastest-growing economy.

His tenure was distinguished by the completion of hydroelectric stations, dams and reservoirs, by prioritizing the space program and by reducing the nuclear deterrent.

In 1965, Ayub Khan entered the presidential race as the Pakistan Muslim League (PML) candidate to counter the popular and famed non-partisan Fatima Jinnah and was controversially reelected for a second term.

He was faced with allegations of widespread intentional vote riggings, authorized political murders in Karachi, and the politics over the unpopular peace treaty with India which closed the Indo-Pakistani War of 1965 and which many Pakistanis considered an embarrassing compromise.

In 1967, wide disapproval of price hikes of food prompted demonstrations across the country led by Zulfikar Ali Bhutto.Ayub Khan dramatically fell from power in 1969 amid the popular uprising in East Pakistan led by Mujibur Rahman. 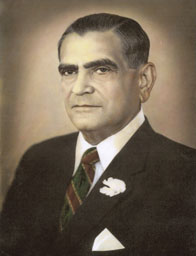