Likelike (Hawaiian pronunciation: [likeːlikeː];Miriam Likelike Kekāuluohi Keahelapalapa Kapili;January 13, 1851 – February 2, 1887) was a princess of the Hawaiian Kingdom and member of the reigning House of Kalākaua.

She was born in Honolulu, on the island of Oʻahu.Likelike's parents were Analea Keohokālole and Caesar Kapaʻakea, and the family were members of the aliʻi class of the Hawaiian nobility.

Before age six, she was raised on the island of Hawaii for her health.Likelike later returned to Honolulu, where she was educated by Roman Catholic and Congregationalist teachers in the city's girls' schools.

She married Scottish businessman Archibald Scott Cleghorn in 1870 and was the mother of Princess Kaʻiulani, the last heir to the throne before the 1893 overthrow of the Hawaiian Kingdom.

Likelike was the first mistress of the ʻĀinahau estate, which became associated with her daughter.She was Governor of the island of Hawaii from 1879 to 1880 and was in the line of succession to the throne after her sister, Liliʻuokalani.

Likelike died under mysterious circumstances in 1887, with rumors that she was malevolently "prayed" to death.She and her siblings are recognized by the Hawaiian Music Hall of Fame as Na Lani ʻEhā (The Heavenly Four) for their patronage and enrichment of Hawaii's musical culture and history. 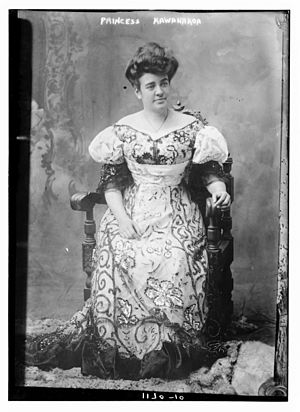 Hawaiian princess
Back
This content was extracted from Wikipedia and is licensed under the Creative Commons Attribution-ShareAlike 3.0 Unported License