Li Xiannian (pronounced [lì ɕjɛ́nnjɛ̂n]; 23 June 1909 – 21 June 1992) was a Chinese Communist military and political leader, President of the People's Republic of China (de jure head of state) from 1983 to 1988 under Paramount Leader Deng Xiaoping and then Chairman of the Chinese People's Political Consultative Conference from 1988 until his death.

He was a full member of the Politburo from 1956 to 1987, and of its Standing Committee from 1977 to 1987.Li worked as an apprentice carpenter in his teenage years to support his family.

He joined the Communist Party in December 1927 and became a soldier in the Chinese Red Army.After studying at the Military–Political University and the Central Party School, he became an influential and successful military commander during the Second Sino–Japanese War and the Chinese Civil War, distinguishing himself in the Huai–Hai Campaign.

After the PRC was established, he served as Governor and Party Secretary of his native Hubei Province from 1949 to 1954, and then joined the central leadership in Beijing, serving as Minister of Finance (1954–1970) and Vice Premier (1954–1982).

He supported Mao Zedong's designated successor, Hua Guofeng, and was named Vice Chairman of the Party (1977–1982).One of the Eight Elders of the Communist Party, he was considered the most leftist among them, both politically and economically.

Li played a key role in blocking privatizations and maintaining state control in many sectors of the economy, promoted classical Communist political and cultural values through his patronage of theorists such as Hu Qiaomu and Deng Liqun, and was instrumental in purging liberals Hu Yaobang and Zhao Ziyang.

He enthusiastically advocated for the military suppression of the Tiananmen Square protests. 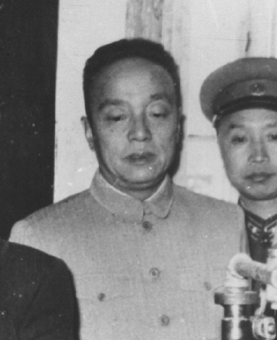 Chinese President
Back
This content was extracted from Wikipedia and is licensed under the Creative Commons Attribution-ShareAlike 3.0 Unported License