He was the son and only child of general Ma Bufang and commanded nationalist forces against the communists at the Heshui Campaign, Meridian Ridge Campaign, and the Lanzhou Campaign during the Chinese Civil War.

Ma was 28 years old when he defeated the Communists in 1948.On the Heshui campaign in 1948 Ma defeated 30,000 Communists.He led the 82nd division, a Cavalry division, of which 30 percent of whom were Muslims to charge the Communists with swords.

Ma complained that the Kuomintang government was not resupplying him enough and that there was no more "revolutionary spirit".On the opposing side General Zhao Shoushan led the Communists, Chao formerly attended the same school as Ma.

Ma was given a silver cup by the Divine Word Missionaries after he came back from the northwestern front.In May 1949, General Hu Zongnan and Ma set up a planned trap.

Hu faked a retreat, then Communist General Peng Dehuai advanced with 120,000 men from Xi'an to Sichuan, but at 75 miles Hu started a pitched battle and then Ma personally led 20,000 of his cavalry forces to defeat the Communist forces and send them fleeing, and he continued to battle the Communist forces throughout July around Xi'an.

In August 1949, Ma Bufang personally traveled by plane to the KMT government in Canton request supplies via airdrop, while his son Ma Jiyuan assumed command over the KMT forces at Lanzhou, who promised to defend the city to journalists, saying "Na shih yi ting ti" "(That is definite)", and, "Lanchow will never fall to the Communists".

However, the government denied his request, and Ma flew back to Lanzhou, then abandoned lanzhou, retreating all the way back to Xining on trucks.

He defended Gansu during the Lanzhou Campaign from the Communists.Ma also was married to two women, and enjoyed watching American movies.

His upbringing was under strict discipline, Chinese proverbs could be found posted around his HQ.He moved with his father to Egypt then to Saudi Arabia when his father was appointed as ambassador of the Republic of China to Saudi Arabia.

In between the move he also traveled to Taiwan to advise the Ministry of National Defense (Republic of China) and the Kuomintang party.

The passing away in Jeddah on 27 February of Ma Jiyuan was greeted with sorrow by the People's Republic of China consulate. 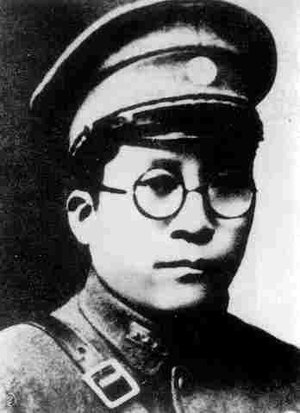 Chinese warlord
Back
This content was extracted from Wikipedia and is licensed under the Creative Commons Attribution-ShareAlike 3.0 Unported License