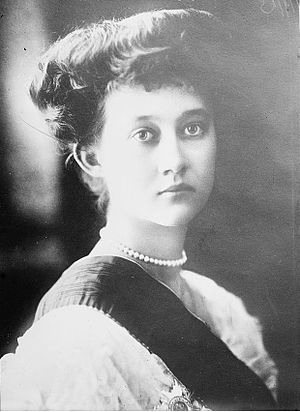 She was the first Grand Duchess regnant of Luxembourg (after five grand dukes), its first female monarch since Duchess Maria Theresa (1740–1780, who was also Austrian Archduchess and Holy Roman Empress) and the first Luxembourgish monarch to be born within the territory since Count John the Blind (1296–1346).

Named as heir presumptive by her father Grand Duke William IV in 1907 to prevent a succession crisis due to his lack of a son, Marie-Adélaïde became Grand Duchess in 1912.

She ruled through the First World War, and her perceived support for the German occupation forces led to great unpopularity in Luxembourg as well as neighbouring France and Belgium.

In 1919, on the advice of Parliament and after enormous pressure from the Luxembourgish people, she abdicated on 14 January 1919 in favour of her younger sister Charlotte who managed to save the monarchy and the dynasty in a national referendum (28 September 1919).

After abdicating, Marie-Adélaïde retired in a monastery in Italy, before leaving due to ill health.She died of influenza in Germany on 24 January 1924, at the age of 29.