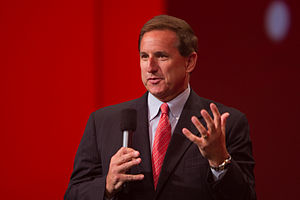 Mark Vincent Hurd (January 1, 1957 – October 18, 2019) was an American technology executive who served as Co-CEO and as a member of the board of directors of Oracle Corporation.

He had previously served as Chairman, Chief Executive Officer, and president of Hewlett-Packard, before resigning in 2010.He was also on the Board of Directors of Globality and was a member of the Technology CEO Council and board of directors of News Corporation until 2010.