Martin Stanford Peters (8 November 1943 – 21 December 2019) was an English footballer and manager.As a member of the England team which won the 1966 FIFA World Cup, he scored the second of England's four goals in the final against West Germany.

He briefly managed Sheffield United before retiring from professional football in 1981.Peters was known as "the complete midfielder" as he could pass the ball well with either foot, was good in the air and difficult to mark because of his movement.

A free kick specialist, he was described by England manager Sir Alf Ramsey, after a game against Scotland in 1968, as being "ten years ahead of his time".

His versatility was such that while he was at West Ham he played in every position in the team, including goalkeeper in his third game, replacing an injured Brian Rhodes.

With his transfer from West Ham United to Tottenham Hotspur in 1970, he became Britain's first £200,000 footballer. 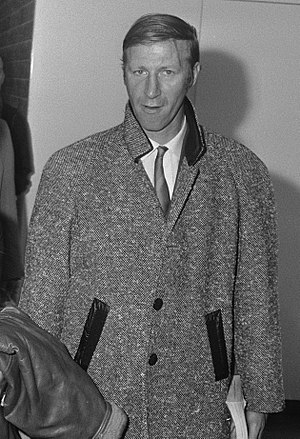 English footballer and manager
Back
This content was extracted from Wikipedia and is licensed under the Creative Commons Attribution-ShareAlike 3.0 Unported License