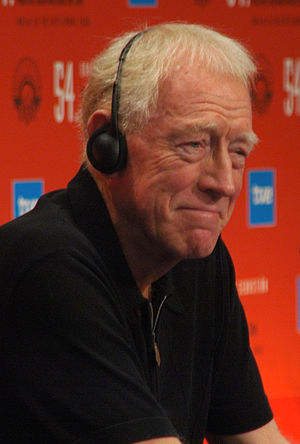 He had a 70-year career in European and American cinema, television, and theatre, appearing in more than 150 films and several television series in multiple languages.

He became a French citizen in 2002, and lived in France for the last two decades of his life.Capable in roles ranging from stolid, contemplative protagonists to sardonic artists and menacing, often gleeful villains, von Sydow was first noticed internationally for playing the 14th-century knight Antonius Block in Ingmar Bergman's The Seventh Seal (1957), which features iconic scenes of his character challenging Death to a game of chess.

He appeared in a total of eleven films directed by Bergman, among which were The Virgin Spring (1960) and Through a Glass Darkly (1961), both winners of the Academy Award for Best Foreign Language Film.

J.Abrams' Star Wars: The Force Awakens (2015).He also had a supporting role in HBO's Game of Thrones as the Three-eyed Raven, for which he received a Primetime Emmy Award nomination.

During his career, von Sydow received two Academy Award nominations for his performances in Pelle the Conqueror (1987) and Extremely Loud & Incredibly Close (2011).

He received the Royal Foundation of Sweden's Cultural Award in 1954, was made a Commandeur des Arts et des Lettres in 2005, and was named a Chevalier de la Légion d'honneur on 17 October 2012.


Swedish actor
Back
This content was extracted from Wikipedia and is licensed under the Creative Commons Attribution-ShareAlike 3.0 Unported License