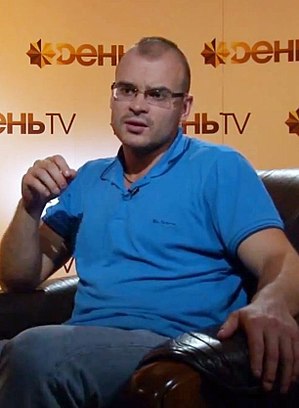 Tesak first gained public attention as a white power skinhead and the leader of the far-right youth group Format 18, which has been described as the "armed wing" of the National Socialist Society.

There are numerous branches within Martsinkevich's Restruct movement, the most prominent of which is Occupy Pedophilia, stating that its goals are fighting pedophiles and spreading neo-nazi views among youth.

Tesak's violent approach and targeting of pedophiles have been criticized, although his actions have led to the imprisonment of a highly ranked official within the Russian judicial system.

Martsinkevich received three prison sentences for inciting racial or ethnic hatred.Tesak was first indicted in 2007, after disrupting political debates by performing the Nazi salute and yelling "Sieg Heil!" at a book club in Moscow.

In 2009, he was sentenced to three years for making a video with racist content.Martsinkevich's memories from this time in prison are expressed through his book Restruct.

Following his release from prison, Tesak was unemployed, posted vlogs, and made a living by charging others for joining his "hunts for pedophiles" and for attending his lectures on life in prison, ways of shoplifting, as well as other subjects.

In the autumn of 2013, Tesak was indicted again for releasing new videos presumably featuring racist remarks.As a result, on 15 August 2014, he was sentenced to five years in prison.

On 11 November 2014, the court reduced the sentence to two years and 10 months.On 27 June 2017, the Babushkinsky district court of Moscow sentenced Martsinkevich to ten years in a strict regimen corrective labor colony for his involvement in attacks targeting synthetic cannabinoids dealers.

Political activist
Back
This content was extracted from Wikipedia and is licensed under the Creative Commons Attribution-ShareAlike 3.0 Unported License