Before the creation of the state of Israel, he was the leader of the Zionist militant group Irgun, the Revisionist breakaway from the larger Jewish paramilitary organization Haganah.

He proclaimed a revolt, on 1 February 1944, against the British mandatory government, which was opposed by the Jewish Agency.As head of the Irgun, he targeted the British in Palestine.

Later, the Irgun fought the Arabs during the 1947–48 Civil War in Mandatory Palestine and its chief Begin was also noted as "leader of the notorious terrorist organisation" by the British government and banned from entering the United Kingdom.

Begin was elected to the first Knesset, as head of Herut, the party he founded, and was at first on the political fringe, embodying the opposition to the Mapai-led government and Israeli establishment.

He remained in opposition in the eight consecutive elections (except for a national unity government around the Six-Day War), but became more acceptable to the political center.

His 1977 electoral victory and premiership ended three decades of Labor Party political dominance.Begin's most significant achievement as Prime Minister was the signing of a peace treaty with Egypt in 1979, for which he and Anwar Sadat shared the Nobel Prize for Peace.

In the wake of the Camp David Accords, the Israel Defense Forces (IDF) withdrew from the Sinai Peninsula, which was captured from Egypt in the Six-Day War.

Later, Begin's government promoted the construction of Israeli settlements in the West Bank and the Gaza Strip.Begin authorized the bombing of the Osirak nuclear plant in Iraq and the invasion of Lebanon in 1982 to fight PLO strongholds there, igniting the 1982 Lebanon War.

As IDF forces remained mired in Lebanon and the economy suffered from hyperinflation, the public pressure on Begin mounted.Depressed by the death of his wife Aliza in November 1982, he gradually withdrew from public life, until his resignation in October 1983. 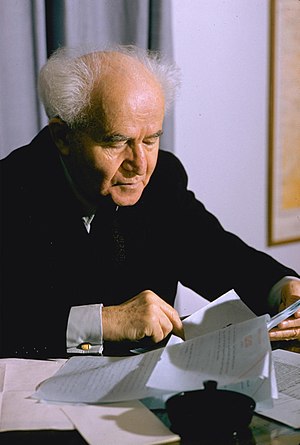 Israeli Prime Minister
Back
This content was extracted from Wikipedia and is licensed under the Creative Commons Attribution-ShareAlike 3.0 Unported License