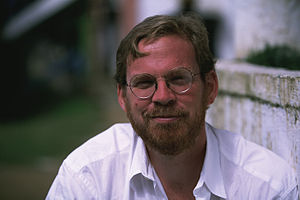 Michael Jerome Hawley (November 18, 1961 – June 24, 2020) was an American academic and artist working in the field of digital media.Previously at MIT’s Media Laboratory where he was a professor and held the Alexander W.

Dreyfoos, Jr. endowed chair, Hawley was the founder or co-founder of several major research programs and projects including MIT's GO Expeditions program, Things That Think, Toys of Tomorrow, Counter Intelligence (a culinary research effort), and founder of the nonprofit organization .

He notably was the scientific director of the American Expedition on Mount Everest in 1998, one of the first major scientific expeditions on Everest.

Hawley's work has been featured in major media such as National Geographic, Time, The New York Times, and on numerous television networks.

His work at MIT has, in his own words, “sought to creatively stretch digital infrastructures, embedding intelligence into all sorts of artifacts and advancing the web of communications.”