He was President of the Romanian Academy and Vice-President of the International Mathematical Union.Born in Giurgiu, the son of a teacher, he attended the Matei Basarab High School in Bucharest.

After completing his undergraduate studies at the Faculty of Mathematics of the University of Bucharest in 1924, he went to Paris, where he enrolled at the École Normale Supérieure and the Sorbonne.

In 1928, he completed his doctoral dissertation, Fonctions complexes dans le plan et dans l'espace, under the direction of Paul Montel.

Peter Freund (who met Nicolescu when he gave a lecture in Timișoara), described him as an "affable, debonair man, and a very handsome ladies' man." Nicolescu was awarded the Legion of Honour, Commander rank, and was elected in 1972 member of the German National Academy of Sciences Leopoldina.

At the International Congress of Mathematicians held in Vancouver, British Columbia, Canada in 1974, he was elected Vice-President of the International Mathematical Union, a position he held from 1975 until his death (his term was completed by Gheorghe Vrănceanu).

A technical high school in Sector 4 of Bucharest bears his name, and so does a boulevard in Giurgiu. 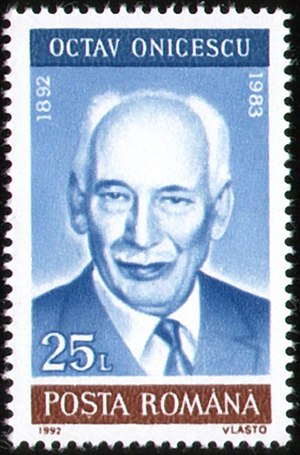 Romanian mathematician
Back
This content was extracted from Wikipedia and is licensed under the Creative Commons Attribution-ShareAlike 3.0 Unported License