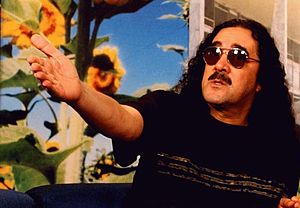 During the 1970s he played guitar and sang in the band Novos Baianos, after which he embarked on a solo career recording 29 albums.

Moreira was one of the most versatile composers of Brazil, mixing the genres of rock, samba, choro, frevo, baião, and classical. Brazilian musician
Back
This content was extracted from Wikipedia and is licensed under the Creative Commons Attribution-ShareAlike 3.0 Unported License