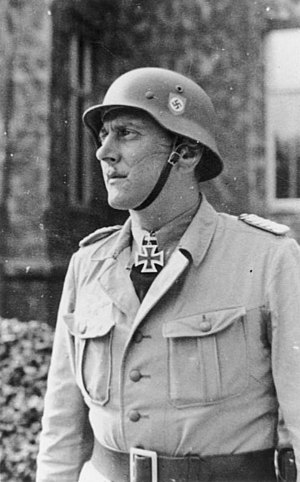 During the war, he was involved in a number of operations, including the removal from power of Hungarian Regent Miklós Horthy and the Gran Sasso raid which rescued Benito Mussolini from captivity.

As a result, he was later, in 1947, charged at the Dachau Military Tribunal with breaching the 1907 Hague Convention, but was acquitted after a former British SOE agent F.

F.E.Yeo-Thomas testified that he and his operatives had been prepared to open fire while wearing German uniforms behind enemy lines.

Skorzeny escaped from an internment camp in 1948, hiding out on a Bavarian farm as well as in Salzburg and Paris before eventually settling in Francoist Spain.

In 1953 he was offered a job as a military advisor to Egyptian President Gamal Abdel Nasser, which he did not take up.

He was an advisor to President Juan Perón.In 1963, Skorzeny was allegedly recruited by the Mossad and conducted operations for the agency.