Paul Michael Edmondson (February 12, 1943 – February 13, 1970) was an American Major League Baseball (MLB) pitcher.Born in Kansas City, Kansas, the right-hander was drafted by the Chicago White Sox out of California State University, Northridge in the 21st round (419th overall) of the first-ever MLB amateur entry draft in June, 1965.

In his major league debut on June 20, 1969, Edmondson pitched a complete game two-hitter in a 9–1 White Sox victory over the California Angels.

Edmondson started thirteen of the fourteen games he appeared in during his MLB career.He had the second-best earned run average (3.70) of any of the six White Sox pitchers who started ten or more games during the 1969 season.

Washington—NO DECISION (August 6) * 6 innings, 3 earned runs vs.Seattle—LOST 3-1 (June 25) While traveling south on rain-soaked U.S.Route 101 near Santa Barbara, California on February 13, 1970, the day after his 27th birthday, his automobile skidded and crashed into oncoming northbound traffic, killing Edmondson and his passenger, Lauraine Leas, 22, of Simi Valley, California.They had traveled from Simi to San Luis Obispo where Lauraine would be attending Cal Poly the following semester.The tragedy occurred only two weeks prior to spring training, and the White Sox had hoped that Edmondson would become the fourth starter in the rotation. 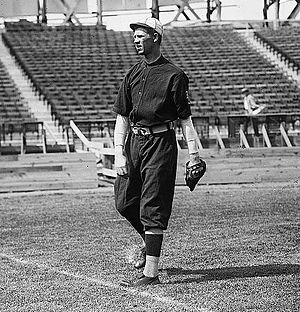 Major League Baseball pitcher
Back
This content was extracted from Wikipedia and is licensed under the Creative Commons Attribution-ShareAlike 3.0 Unported License