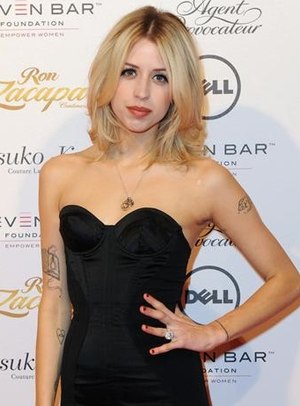 Peaches Honeyblossom Geldof (13 March 1989 – 6 or 7 April 2014) was an English columnist, television personality, and model.Born and raised in London, Geldof was educated at Queen's College after her parents' divorce in 1996, and later moved to New York City, where she worked as a writer for the UK edition of Elle Girl magazine.

She also worked in television, producing and developing her own television programmes which were broadcast in the United Kingdom in 2006.

In the later part of her life, Geldof worked primarily in modelling and television, and gave birth to sons in 2012 and 2013.

Geldof was found dead at her home on 7 April 2014; the inquest found that she died of a heroin overdose.

TV Personality
Back
This content was extracted from Wikipedia and is licensed under the Creative Commons Attribution-ShareAlike 3.0 Unported License