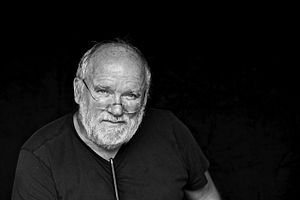 Peter Lindbergh (born Peter Brodbeck; 23 November 1944 – 3 September 2019) was a German fashion photographer and film director.He had studied arts in Berlin and Krefeld, and exhibited his works before graduation.

In 1971, he turned to photography and worked for the Stern magazine.In fashion photography, he portrayed models Linda Evangelista, Naomi Campbell, Tatjana Patitz, Cindy Crawford and Christy Turlington together for the January 1990 British Vogue cover, beginning an era of supermodels.

He photographed the Pirelli Calendar three times (1996, 2002, 2017), made several films, and created covers for music including Tina Turner's Foreign Affair, Sheryl Crow's The Globe Sessions and Beyoncé's I Am...

Sasha Fierce.His work has been presented at international exhibitions.Lindbergh preferred black & white photography, and noted in 2014: "This should be the responsibility of photographers today to free women, and finally everyone, from the terror of youth and perfection."

Fashion photographer
Back
This content was extracted from Wikipedia and is licensed under the Creative Commons Attribution-ShareAlike 3.0 Unported License