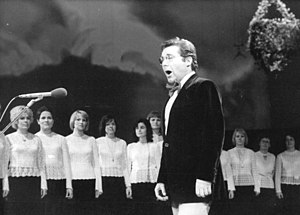 Peter Schreier (29 July 1935 – 25 December 2019) was a German tenor in opera, concert and lied, and a conductor.He was regarded as one of the leading lyric tenors of the 20th century.

Schreier was a member of the Dresdner Kreuzchor conducted by Rudolf Mauersberger, performing as an alto soloist.He became a tenor, focused on concert and lieder singing, well known internationally for the Evangelist parts in Bach's Christmas Oratorio and Passion.

A member of the Berlin State Opera from 1963, he appeared in Mozart roles such as Belmonte in Die Entführung aus dem Serail and Tamino in Die Zauberflöte, and in the title role of Pfitzner's Palestrina, among others.

He appeared at the Vienna State Opera and the Metropolitan Opera, among others, as one of few singers from the German Democratic Republic to perform internationally.

Schreier made many recordings, especially of Bach's works as both a singer and a conductor, even simultaneously.He recorded many lieder including the song cycles by Schubert and Schumann.

He was known for intelligent understanding of texts and their musical expression with intensity.Schreier received awards including the Ernst von Siemens Music Prize, Léonie Sonning Music Prize.