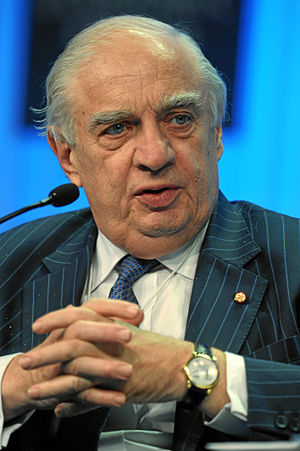 Peter Denis Sutherland (25 April 1946 – 7 January 2018) was an Irish businessman, barrister and Fine Gael politician who served as UN Special Representative for International Migration from 2006 to 2017.

He was known for serving in a variety of international organisations, political and business roles.Sutherland was the UN Special Representative of the Secretary-General for International Migration until March 2017.

He was a board member of Wallenberg-owned ABB and the Wallenbergs' conglomerate holding company, Investor AB.A barrister by profession, Sutherland was a Senior Counsel of the Bar Council of Ireland.

He received numerous awards including the European Person of the Year Award (1988).