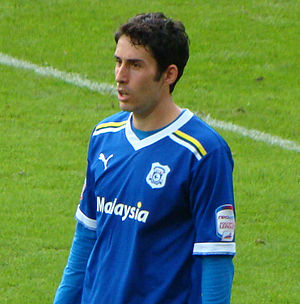 Peter Michael Whittingham (; 8 September 1984 – 18 March 2020) was an English professional footballer.His primary position was as a central midfielder, although he operated as a winger on both the left and right, as well as a second-striker.

He was part of the Aston Villa team that won the 2001–02 FA Youth Cup, and a year later he made his Premier League debut.

Whittingham had loans at Championship clubs Burnley and Derby County in 2005.In January 2007, he signed for Cardiff City for a fee of £350,000.

In eleven seasons at Cardiff, Whittingham played 457 competitive matches and scored 96 goals, putting him seventh on the all-time appearances list and ninth among their goalscorers.

During his time at that club they won the Championship in 2013, and reached the 2008 FA Cup Final and 2012 League Cup Final.

He was named three times in the Championship's PFA Team of the Year, and his 20-goal haul in the 2009–10 season made him the division's top scorer.

He signed for Blackburn Rovers in June 2017, and made 24 appearances for the club before his contract was terminated by mutual consent in August 2018.

Footballer
Back
This content was extracted from Wikipedia and is licensed under the Creative Commons Attribution-ShareAlike 3.0 Unported License