Pierre Yrieix Daumesnil (14 July 1776 in Périgueux – 17 August 1832 in Vincennes) was a French soldier in the armies of Napoleon during the first Empire and Restoration, eventually rising to the rank of brigadier general.

He participated in the Battle of Wagram, where he lost a leg which was replaced by a wooden prosthesis; hence his nickname jambe de bois ("wooden leg").

He was assigned to the defense of the Château de Vincennes in 1812.Vincennes was then an arsenal containing 52,000 new rifles, more than 100 field guns and many tons of powder, bullets and cannonballs—a tempting prize for the Sixth Coalition marching on Paris in 1814 in the aftermath of the Battle of the Nations.

However Daumesnil faced down the allies and replied with the famous words "I shall surrender Vincennes when I get my leg back" (Je rendrai Vincennes quand on me rendra ma jambe, with a polysemic pun in French that is lost in translation).

With only 300 men under his command, he resisted the Coalition until King Louis XVIII of France ordered him to leave the fortress.Daumesnil rallied to Napoleon at his return, again holding Vincennes against the large mass of Coalition troops.

He managed to get a message to Royalist officer Louis-Victor-Léon de Rochechouart asking for help.He then surrendered and five months later he was retired by the Bourbons.

When the Revolution of 1830 began, he was recalled and given the rank of lieutenant general.He died of cholera on 17 August 1832.

Napoleon III awarded his wife a pension and the position of superintendent of the imperial house of Saint-Denis. 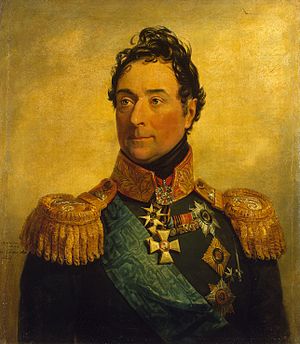