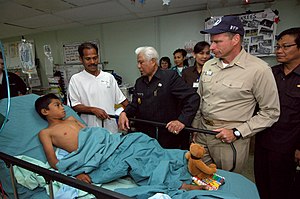 Piet Alexander Tallo (27 April 1942 - 25 April 2009) was an Indonesian politician.He was governor of East Nusa Tenggara in 1998-2008.Because he was seriously ill since 2007, the governor often handed tasks over to his vice governor, Frans Lebu Raya, who was elected as governor through the election in 2008.

He received a law degree from the Gadjah Mada University in 1970.Tallo also served as regent of South Central Timor Regency in 1983-1993.

Indonesian politician
Back
This content was extracted from Wikipedia and is licensed under the Creative Commons Attribution-ShareAlike 3.0 Unported License