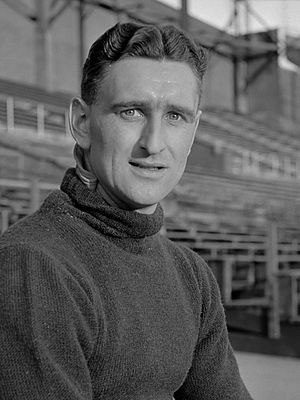 Pieter Cornelis "Piet" Kraak (14 February 1921 – 28 April 1984) was a Dutch football goalkeeper and manager.Known for his ferocity in the penalty area, Kraak played most of his senior career for Stormvogels.

He also gained 33 caps for the Netherlands national team, including appearances at the 1948 Summer Olympics and 1952 Summer Olympics.After his playing career he worked as a coach, notably at Velox before moving to Denmark where he coached AaB and Holbæk B&I, among others.

Dutch footballer and manager
Back
This content was extracted from Wikipedia and is licensed under the Creative Commons Attribution-ShareAlike 3.0 Unported License