Pietro Gasparri, GCTE (5 May 1852 – 18 November 1934) was a Roman Catholic cardinal, diplomat and politician in the Roman Curia and the signatory of the Lateran Pacts.

He served also as Cardinal Secretary of State under Popes Benedict XV and Pope Pius XI. 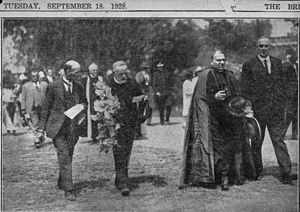