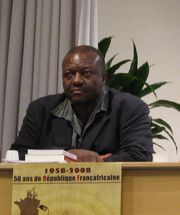 Pius Njawé (4 March 1957 – 12 July 2010) was a Cameroonian journalist and director of Le Messager as well as Le Messager Populi.

Arrested over 100 times for his reporting, Njawé won several awards for his work, including the 1991 CPJ International Press Freedom Award and the 1993 Golden Pen of Freedom.

In 2000, he was named one of International Press Institute's fifty World Press Freedom Heroes of the previous fifty years.In Njawé's obituary, the New York Times described him as "a symbol of opposition to the autocratic regime of Paul Biya".

Belgian journalist
Back
This content was extracted from Wikipedia and is licensed under the Creative Commons Attribution-ShareAlike 3.0 Unported License